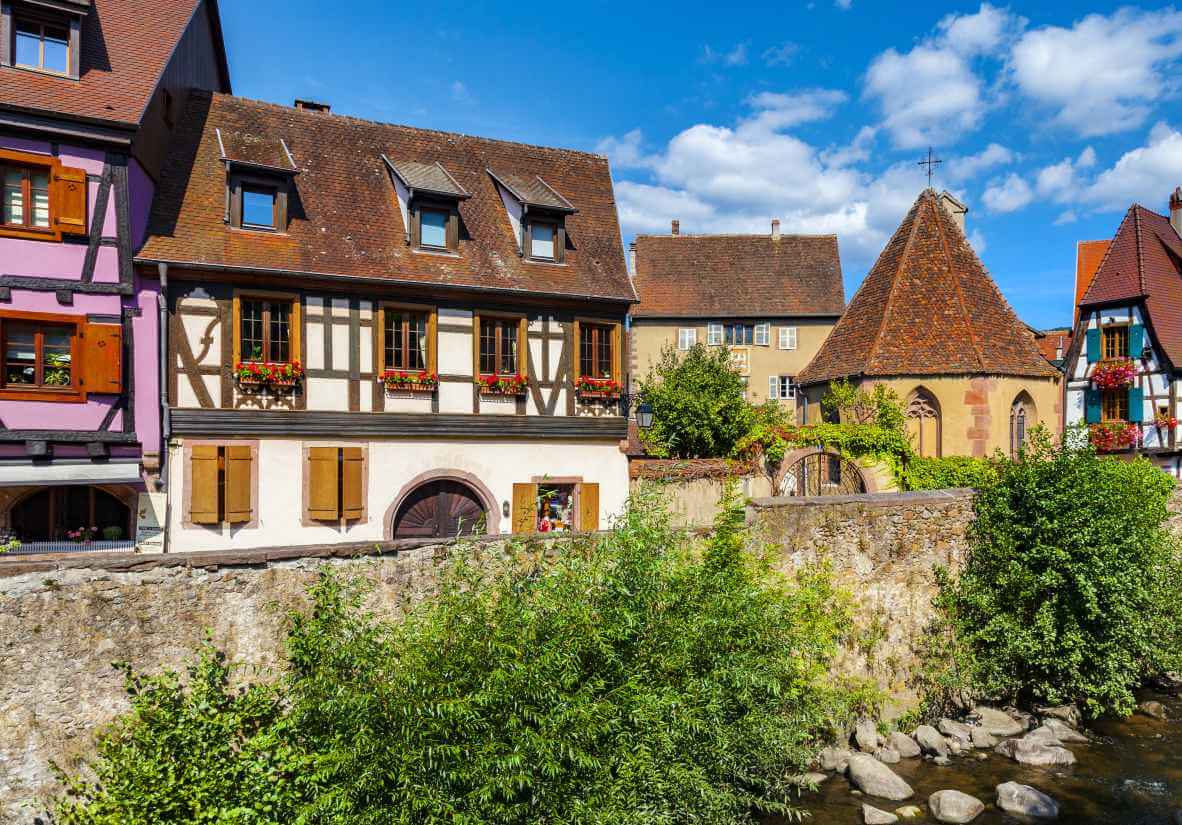 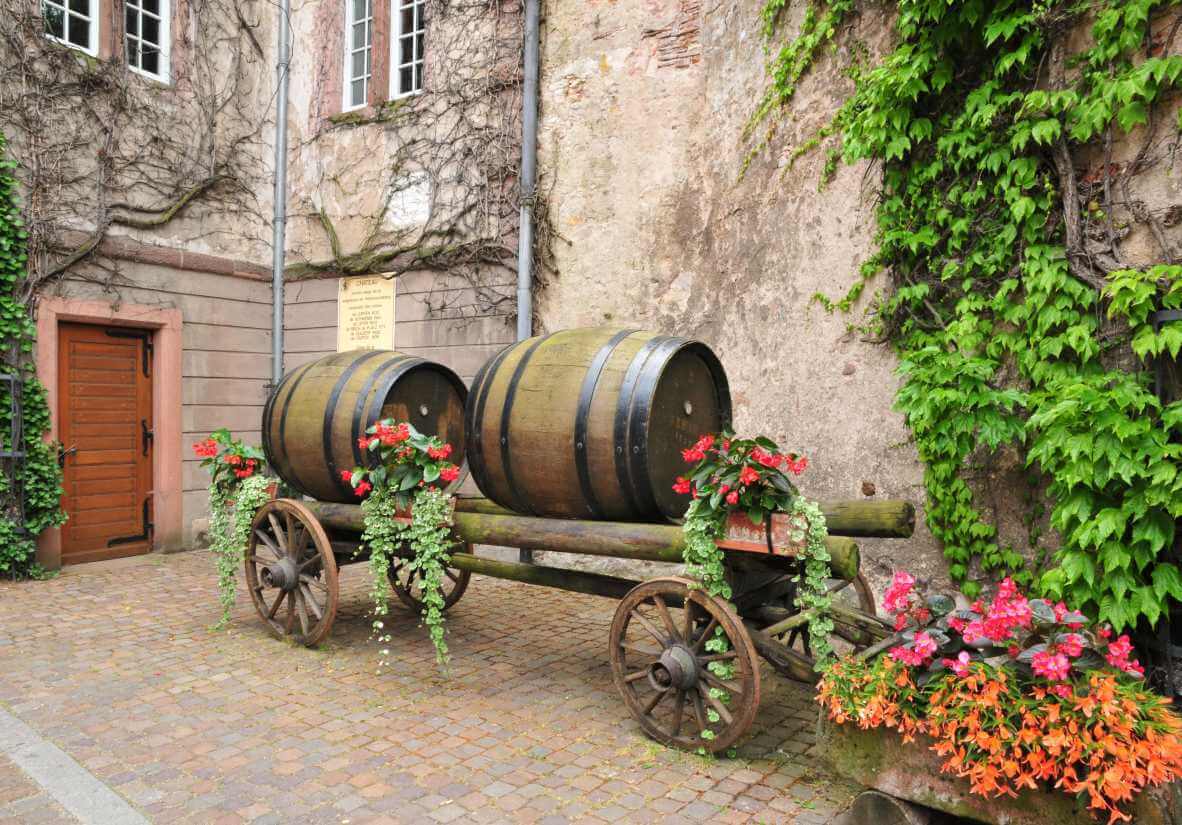 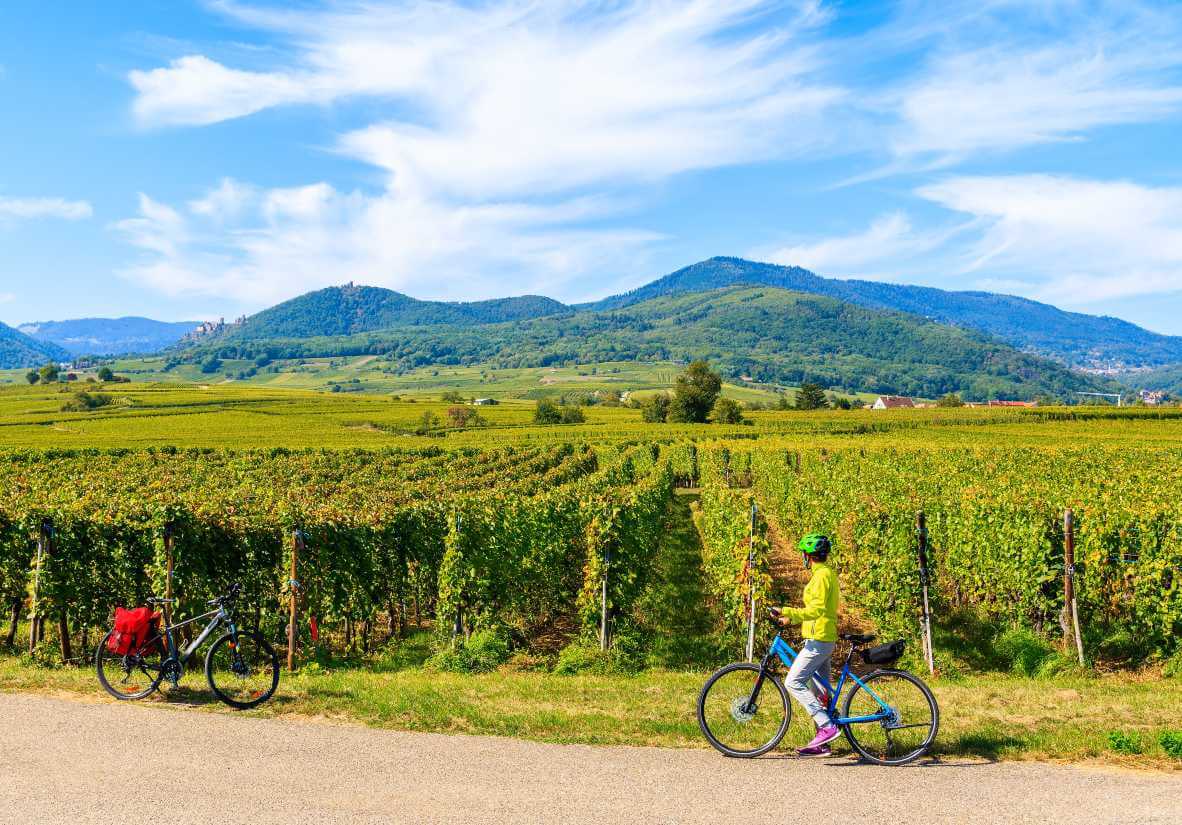 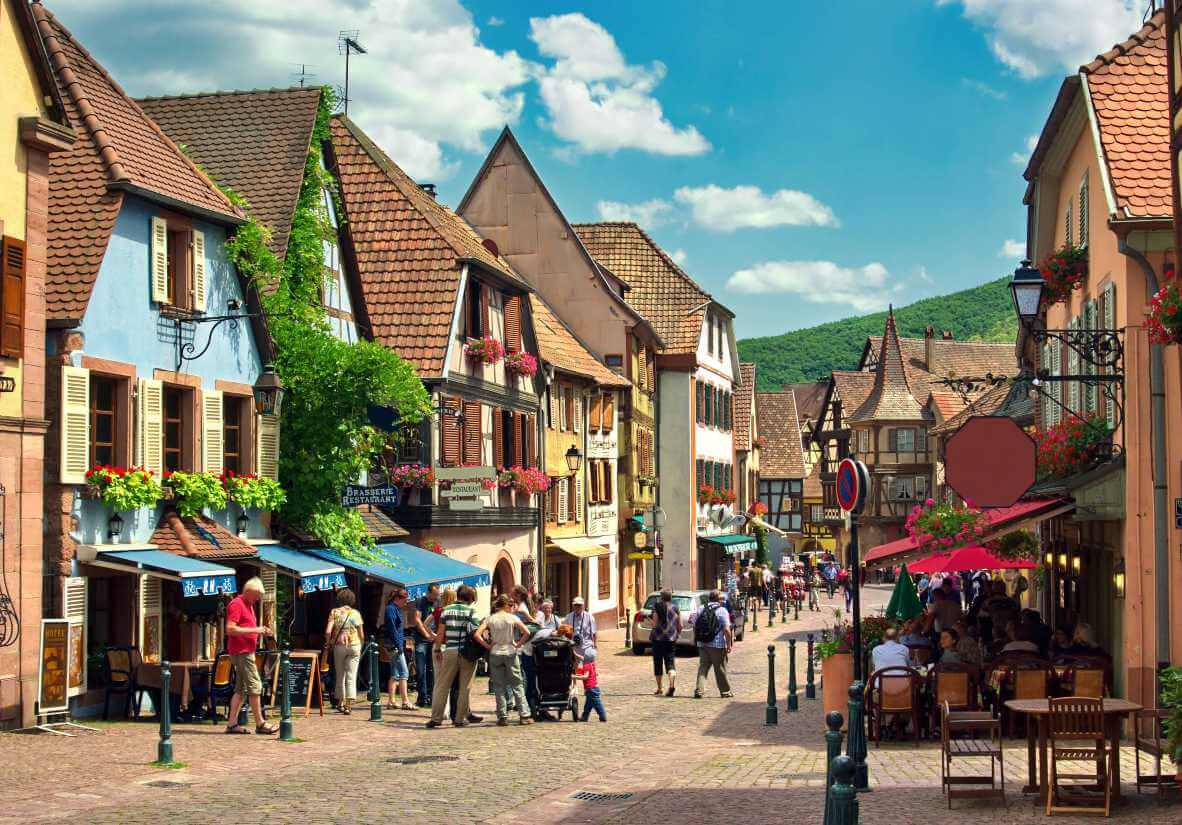 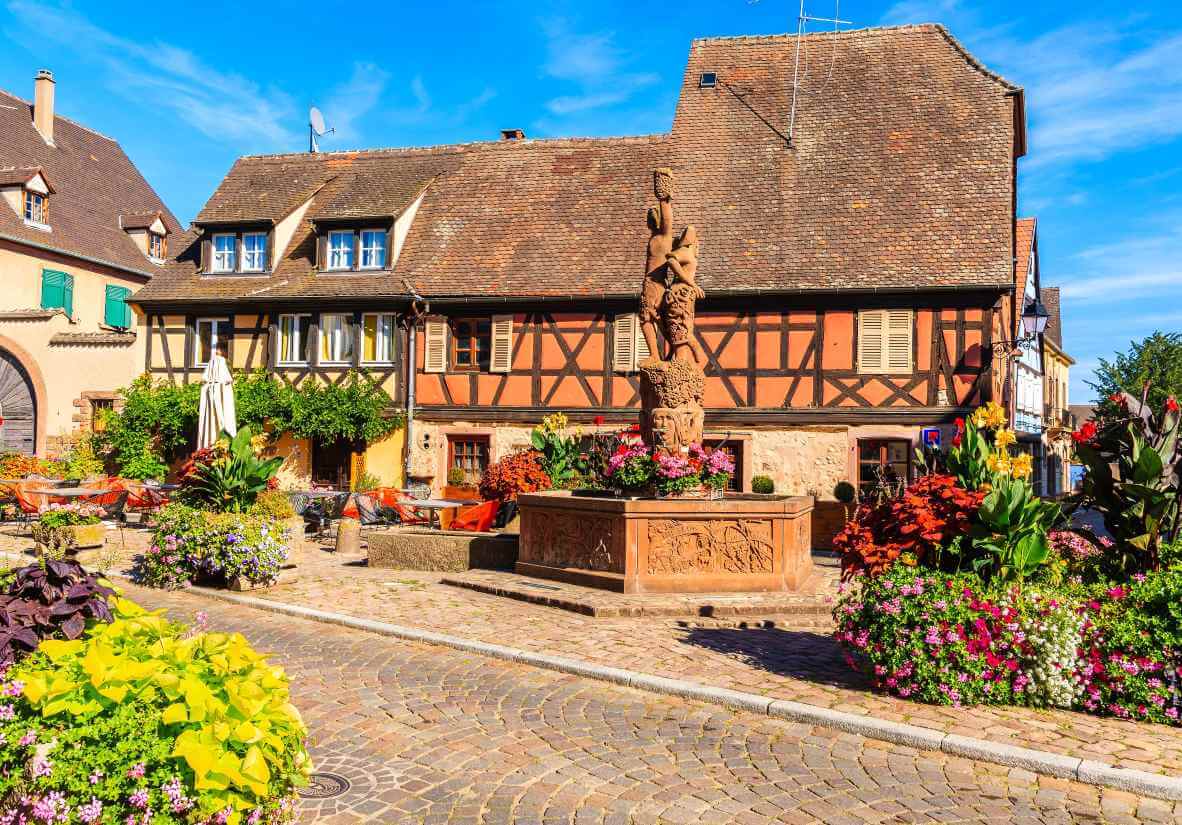 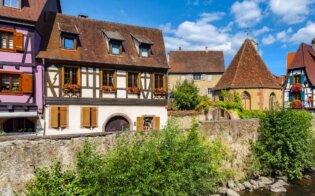 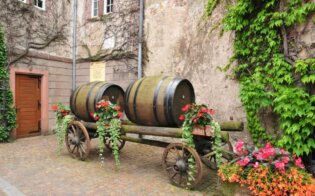 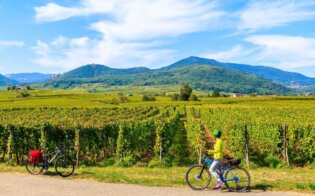 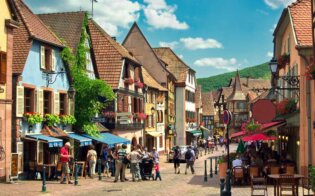 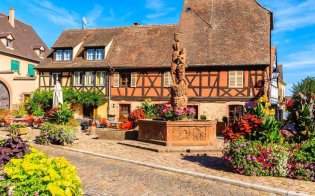 Tour the Alsace and the Vosges National Park

The Alsace region is synonymous with gastronomy and wine. Get to know the best of it during a holiday that will take you through ancient forests and the Vosges Mountains.

Tour the extensive vineyards that have made the wines of this region one of the most recognized and enjoy them while strolling through charming villages.

After experiencing the Route des Vins (The Wine Route), tour the Vosges Mountains, its chapels and castle ruins that show times of war and the history of France.

We recommend flying to Basel Airport, because it is the nearest one to Kientzheim.

Take advantage of this day to walk through this medieval village.

Start the tour of the Route des Vins with a walk to Kaysersberg. Enjoy the delights prepared in its bakeries, get to know the ruins of the 13th century castle that stands out from anywhere in the village, and the 16th-century fortified bridge that offers a beautiful view over the river.

Afterwards, take the Camino de Santiago to the spectacular village of Riquewihr, which seems to have remained in the past, and where you will be able to get to know many monuments. From there head to Ribeauville, where the day will end.

Day 3 - Enjoy your day in Ribeauville

Discover one of the most beautiful towns in France, surrounded by three castles: St-Ulrich, Girsberg and Haut-Ribeaupierre Castles.

Be sure to visit its wine cellars, Tour des Bouchers and Friedrich Fountain. You can also take a walk to Bergheim.

One of these castles, that of St. Ulrich, includes among its remains the square tower and the main building from the 12th century, a room called the Knights Hall, the Barbican in the 13th, and the Chapel enclosure in the 14th century.

Afterwards, walk through the colourful town of Thannenkirch, where you end your day.

Day 5 - Enjoy your day in Thannenkirch

For your 5th day of walking, choose one of the many routes around Thannenkirch for a quiet, comfortable and walk very close to where you are staying. Also, if you prefer, take the well-known GR5 route to the Chateau du Haut-Koenigsbourg Castle, built on Mount Stophanberch.

Be sure to visit in Thannenkirch, heritage and representative areas of the region, such as the Church of St. Catherine, built in the 18th century, the studio of the artist Andre Bosshardt and the town hall, from the year 1824.

Start the day with a transfer to Aubure, the highest village in Alsace. Once there, you will start your walk through fir and pine forests and over agricultural land, passing through Freland and ending in Lapoutroie, a place of transition between the Alsace plain and the Vosges Mountains.

This walk will take you along the infallible summit of Tete des Faux mountain, at 1209 metres of altitude, with incredible panoramic views and fortifications built during The First World War. In the area, you will find descriptions that tell the history of this ancient war zone.

The day begins on the road to Orbey, a town dating from the Middle Ages, surrounded by lush forests and two beautiful natural lakes, Lake Blanc and Lake Noir.

You will pass through Labaroche, where you will get to know the Museum of Wood Trades and The Wihr Cross obelisk. On your way back, be sure to visit the ruins of Kaysersberg Castle, built in the early 13th century.

To return home or continue your journey, you can head from Kientzheim to Basel Airport by train, bus or rented car. 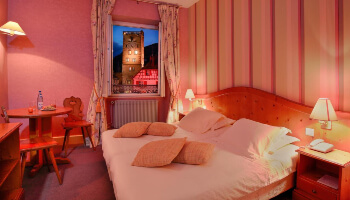 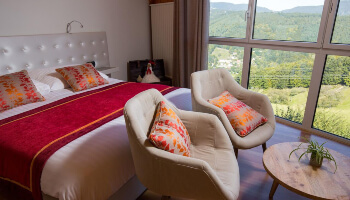 To start your holiday, we recommend flying to Basel Airport, because it is the nearest one to Kientzheim.

On your return you can travel from Kientzheim to Basel Airport by train, bus, or rented car.

This tour has a medium-low degree of difficulty, so your walks will not require too much strength. Moderate physical activity and avoiding a sedentary lifestyle will allow you to feel comfortable with the ascents and descents on this route.

Who do you recommend this trip to?

This tour of the Alsace and the Vosges National Park is an excellent option for couples. It is also enjoyed to the fullest by lovers of wine, gastronomy, nature, art and culture.