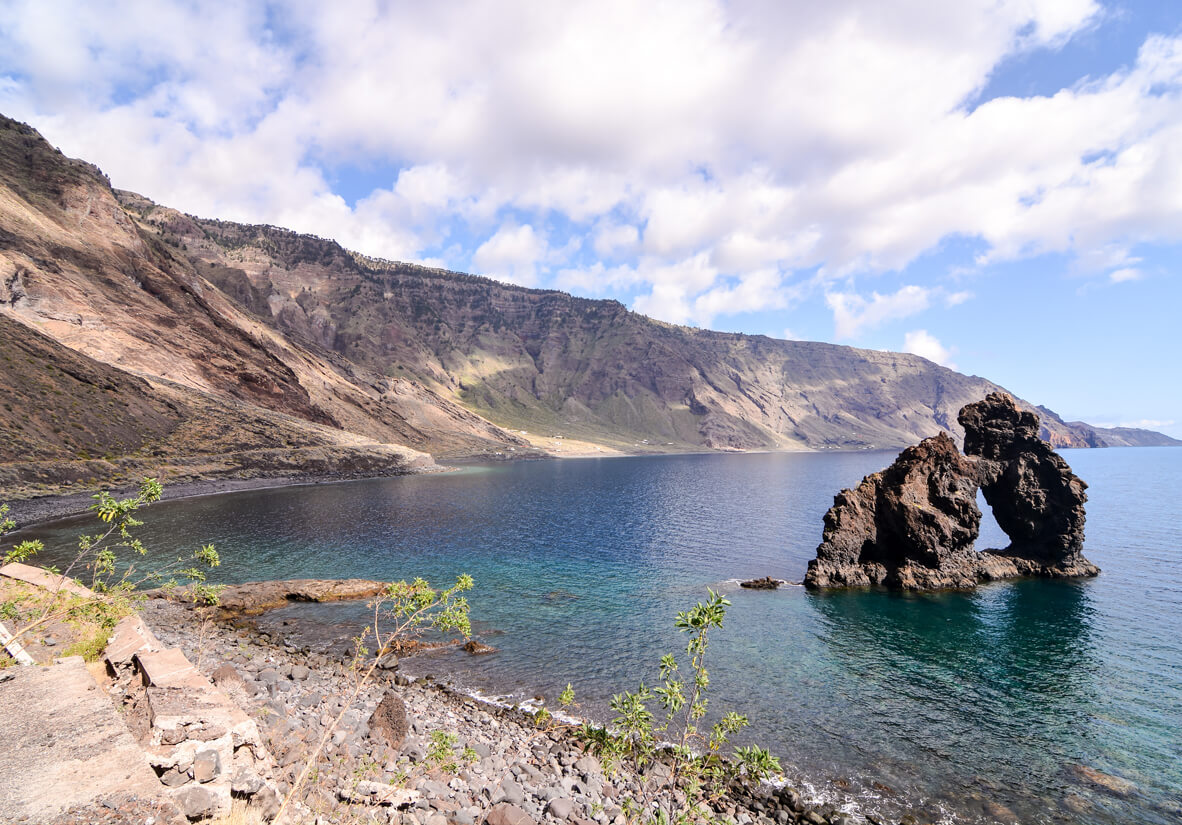 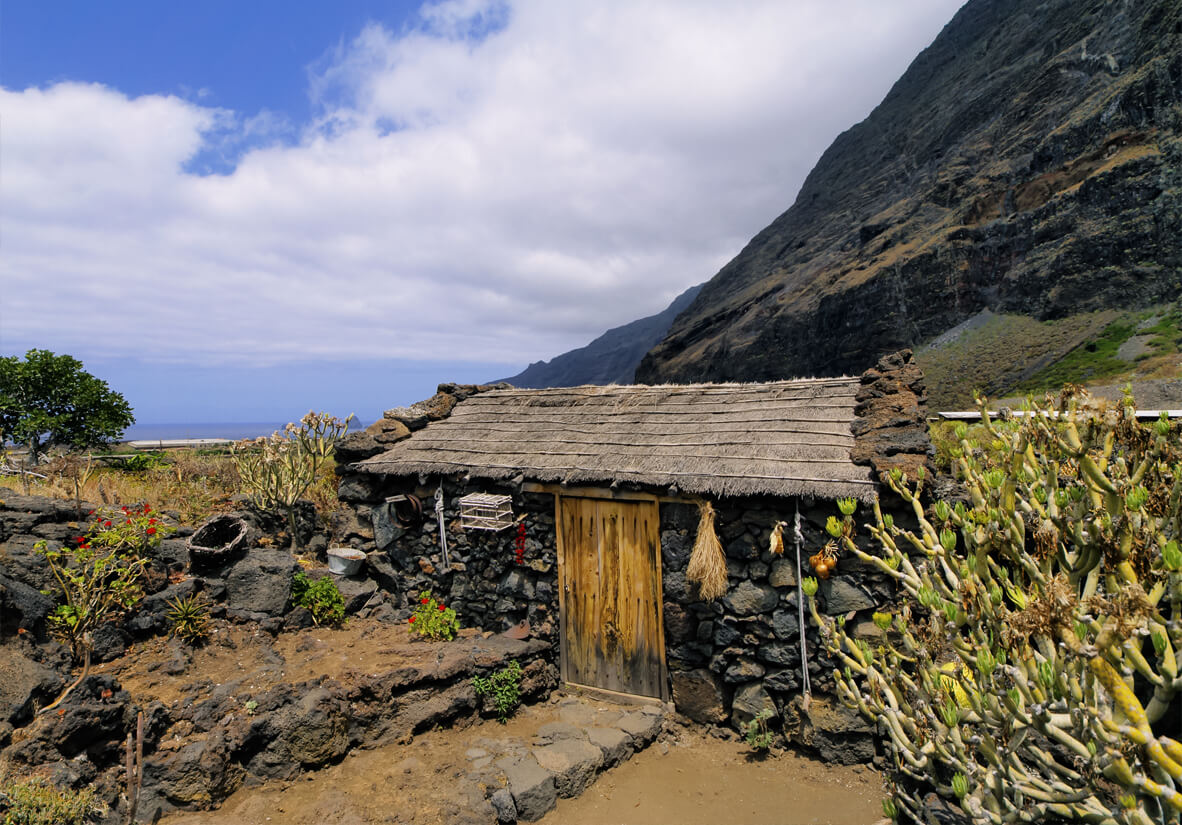 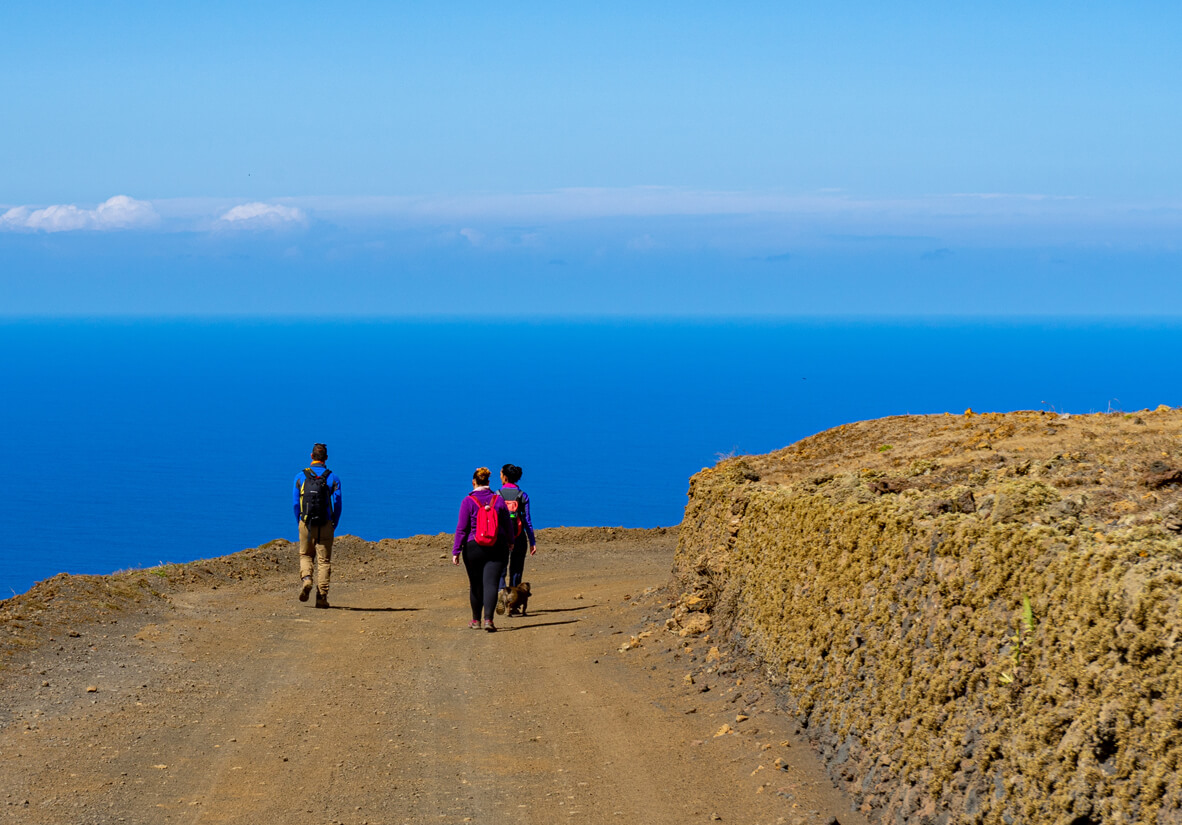 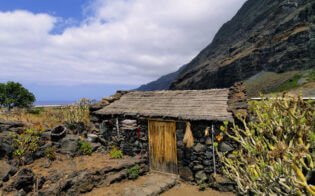 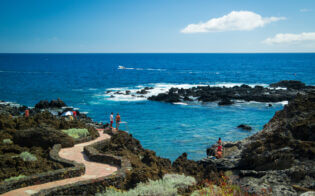 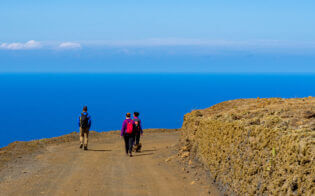 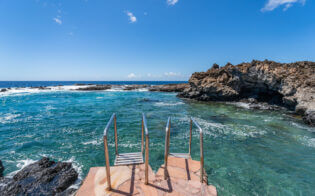 El Hierro was considered for centuries as the "end of the earth," before explorers made it a starting point for their discoveries. Known as the "Meridian Island", its habitat remains untouched and its culture attached to its roots, making it an ideal destination for those who want an unusual holiday.

This island is distinguished by its varied landscapes and geography. On it, you will find a great landslide, which happened 50,000 years ago, when much of the land fell into the sea, resulting in the steep Gulf Valley.

The steep slopes of this bay are home to an ancient laurel forest, and imposing ridges abruptly mark the change of landscapes, having much drier scenery in Sotavento, with stands of ancient pines and moors leading to the rocky coast.

The variety of the terrain is fascinating and is home to rich, mostly endemic wildlife. This island is home to the giant lizard, once thought to be extinct. Such is its wealth and value, that 60% of El Hierro has been declared a Biosphere Reserve by UNESCO.

We recommend you to travel from Tenerife North Airport to El Hierro Airport.

At El Hierro Airport, you must take a taxi to the hotel, where after settling in, you can enjoy a delicious dinner.

The journey will start with a short transfer to Valverde, where you can explore this charming little town before starting the stretch of the Camino de la Virgen, a pilgrimage route that runs throughout the island.

The tour will take you to a viewpoint and you will get to know the Garoé, the sacred tree of the Bimbaches, ancient inhabitants of El Hierro. From there, you will descend back to Mocanal, enjoying a beautiful view of the coast, with Tenerife and La Gomera as a background.

You can make the decision to extend your walk to Pozo de Las Calcosas, where you will find amazing natural pools.

Leaving the hotel, you will cross the village to reach the starting point of this route through the valley.

You will cross small villages until you reach the Mirador de la Peña, from where you can see the gulf basin. During the ascent route through the valley, you will cross the plains of the Nisdafe Plateau, where stone-lined fields are occupied by sheep and cattle.

At the Jinama Viewpoint, you will descend an ancient road to Frontera, at the top of the mountain, where the Church of Nuestra Señora de la Campanaria belltower is located.

The route ends with a descent until you reach the Los Verodes apartments, where you will stay for two nights.

Explore the Gulf Valley, famous for its pineapple production, giant lizards and ancient village. On this tour you will walk on quiet paths to the coastal part of Las Puntas. There, you can immerse yourself in the natural pools and enjoy a delicious lunch in one of the restaurants in the area, specializing in seafood.

Be sure to visit the Guinea and Lagartario Ecomuseum

Walking to the Charco Azul

Follow a linear route along an ancient aqueduct system, then descend through terraces to the coast, where a series of stone steps will take you to the Charco Azul (Blue Pool), a beautiful natural turquoise water pool.

Start the journey towards the city, until you reach the Camino San Salvador, located at the top of the valley, in a wooded, moss-covered terrain. As you progress on this route, you'll find yourself overlooking the coast. The final ascent will take you to the picnic area of Hoya del Pino.

As you descend, you will cross the lichen-covered laurel forest, and reach the beautiful village of Sabinosa, walking through its volcanic terrain until you reach the Pozo de la Salud Spa.

Circular walk through the juniper forest

The tour begins with a short bus ride to Sabinosa. Once there, the ascent will begin through the steep slopes of El Golfo, passing along the Camino La Dehesa, and a narrow path with stone walls that leads to the Hermitage of Virgen de Los Reyes.

The walk will continue through La Dehesa, an area where you will find a large number of wild junipers, emblematic plants of the island. A brief ascent will take you to the edge of the ridge from where you will undertake the return to Sabinosa.

This walk will take you through Punta de La Dehesa, a volcanic area in the northwest area of the island. There you will find the La Dehesa Chapel.

A 90-minute taxi ride will allow you to get to know most of the island. The journey takes place on the road that stretches along the northwest cliffs. Continuing through the southwest of El Hierro, you will see the Morcilla Lighthouse from high up, and is located next to the monument to the ancient zero meridian, considered the end of the world, until Christopher Columbus began his journey westwards.

The taxi ride ends in the centre of the island, where you start a walk through a wooded landscape, to the Fireba Volcano. From there, the landscape changes to green meadows with a beautiful view of the southeast coast.

The descent will take you over a rocky path to Timijiraque, where a taxi will pick you up to take you to the Parador de El Hierro, located next to the cliffs.

At the end of your stay, a taxi service that is included, will take you to El Hierro Airport, where you can take your flight to Tenerife North Airport. 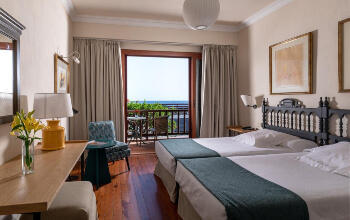 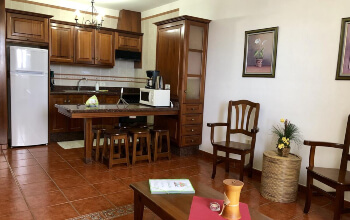 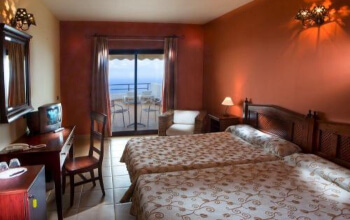 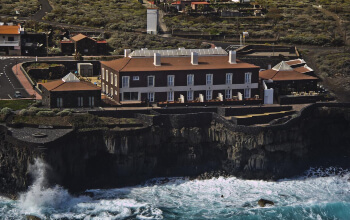 To get to the starting point and return to your place of origin or continue your trip to other cities, you must arrive at Tenerife North Airport.

From El Hierro Airport, you can take a taxi to the hotel. At the end of your holiday, taxi transportation from the hotel in Las Playas to the airport is included.

Should I have travel insurance?

As a prevention and safety measure, we always recommend taking out travel insurance that covers the activities you will do during your holiday, emergency evacuation and hospital care.

What kind of equipment do I need?

The detailed information will be sent to you once you confirm the reservation. This indicates a specific list of items, including good walking boots or shoes, fresh and easy-to-dry clothing, a backpack and enough sunscreen.

Yes, we will transfer the luggage between accommodation according to your itinerary. Each person can take a 20 kg (45 lbs) suitcase.

What is the best time of year to travel?

The walk is available from January to May and from September to December. Any time during these periods is ideal for your holiday.