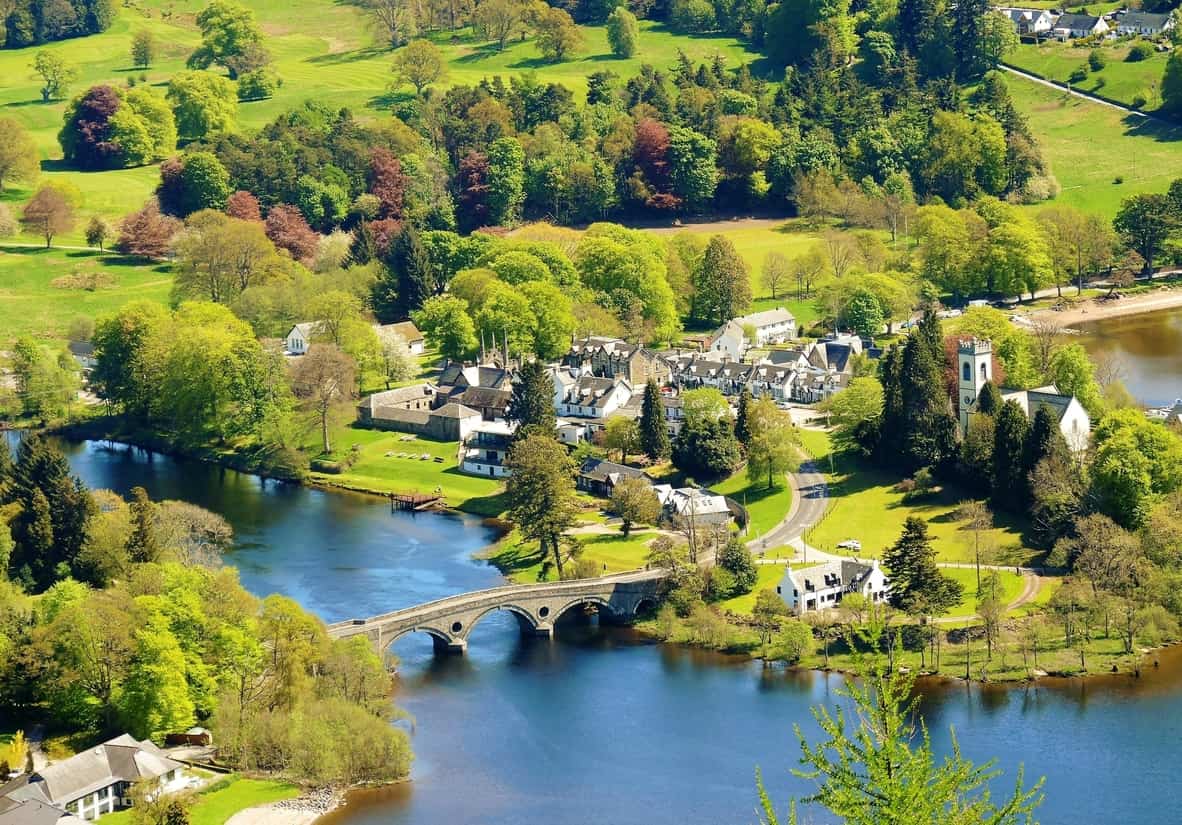 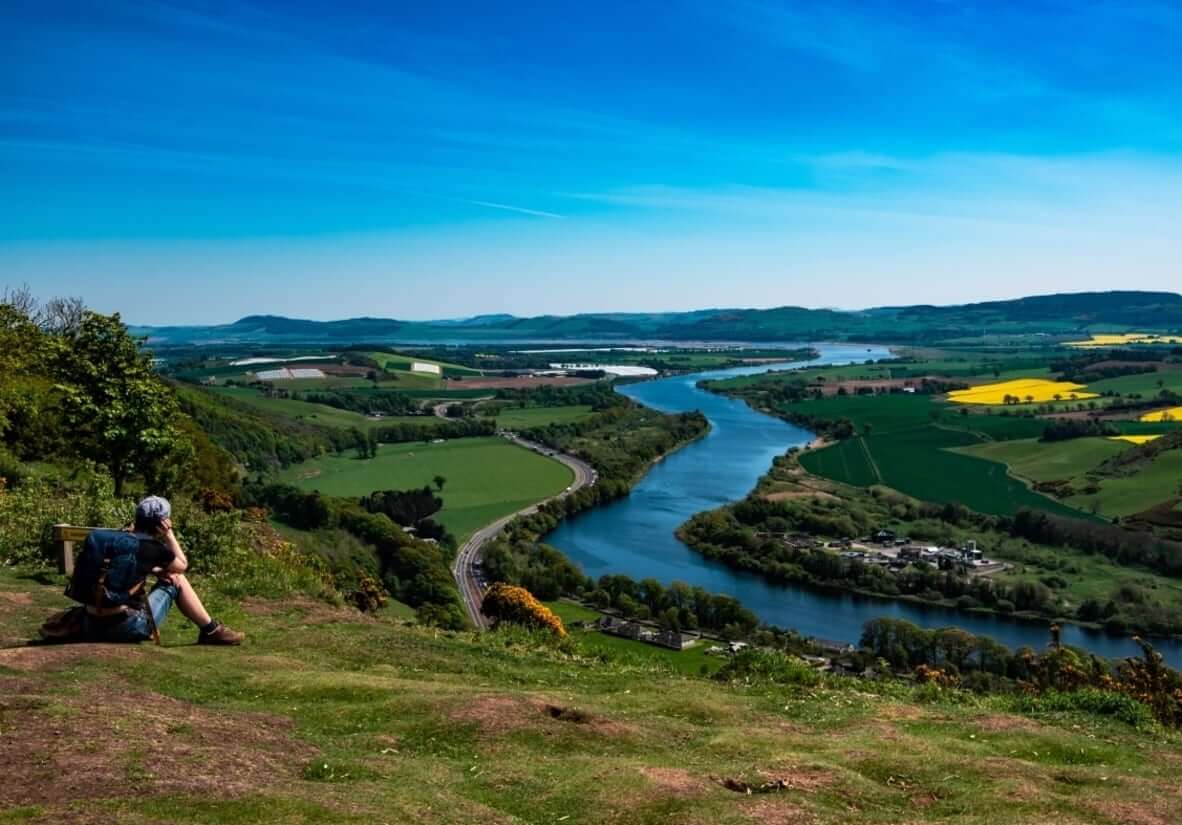 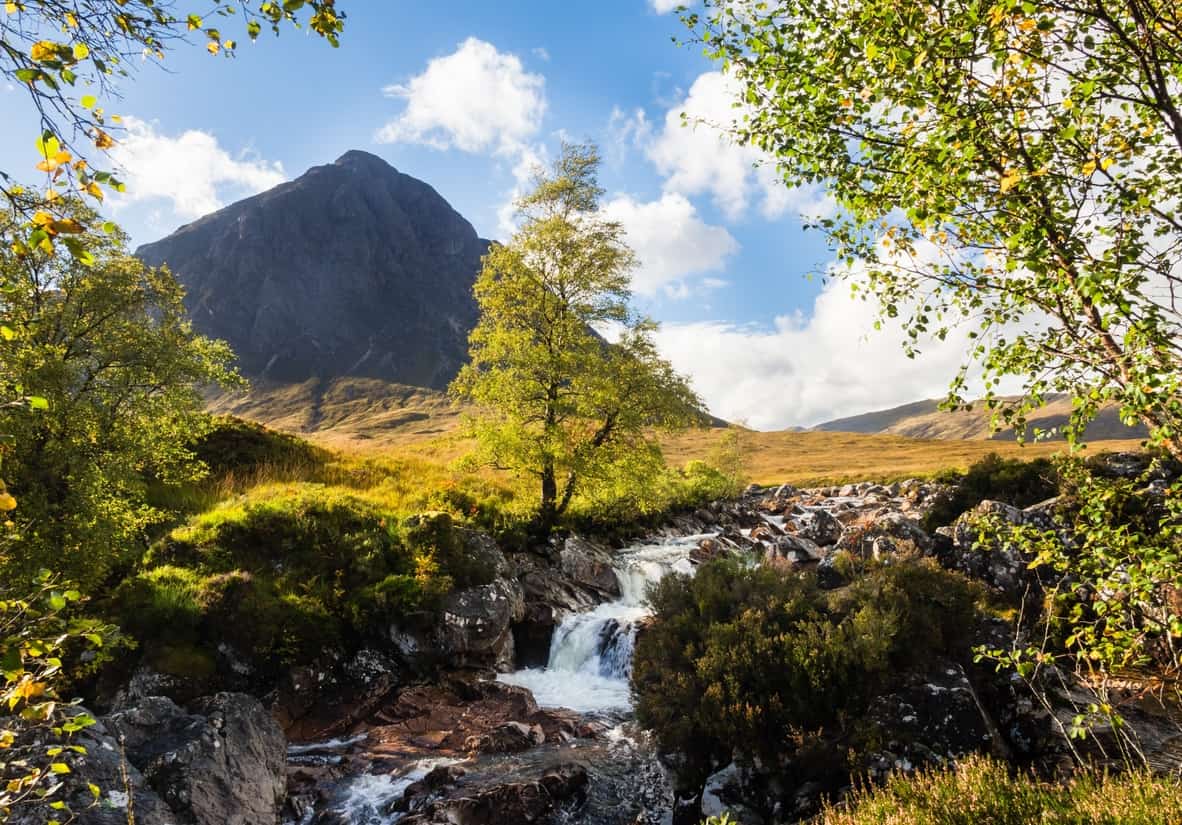 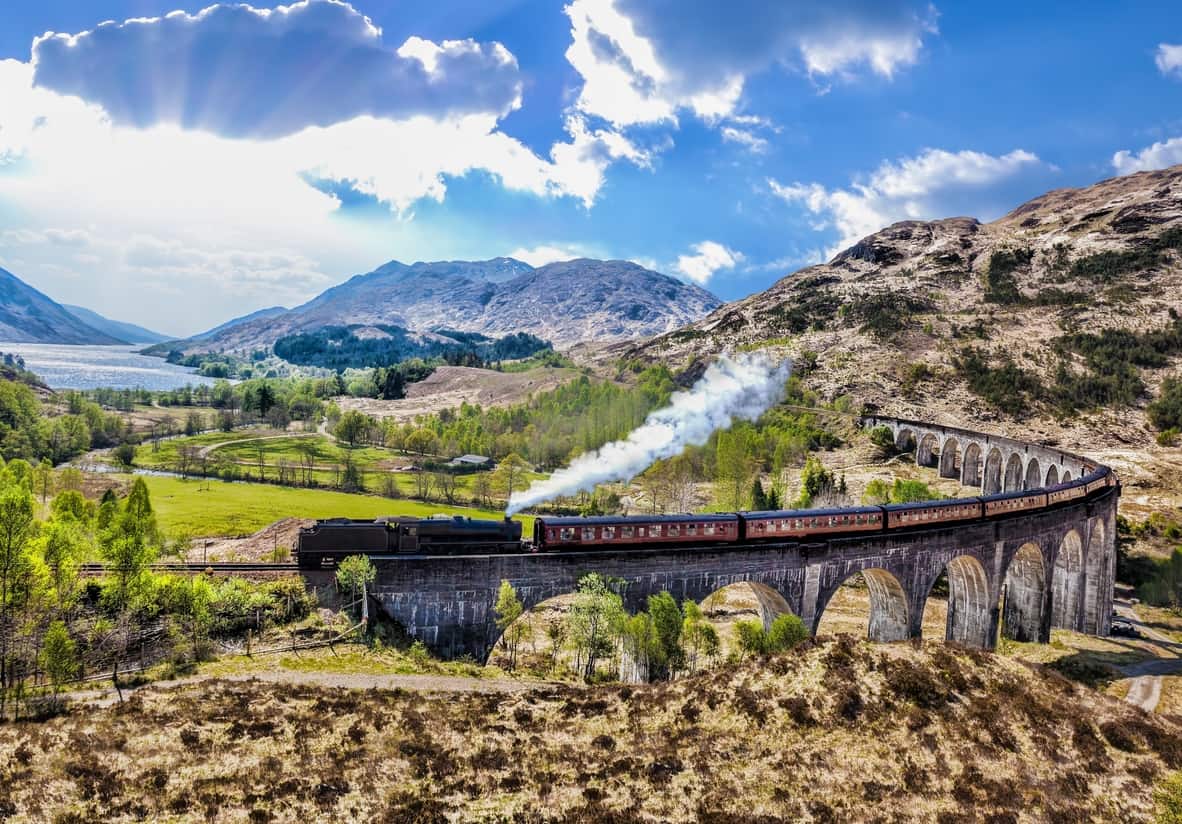 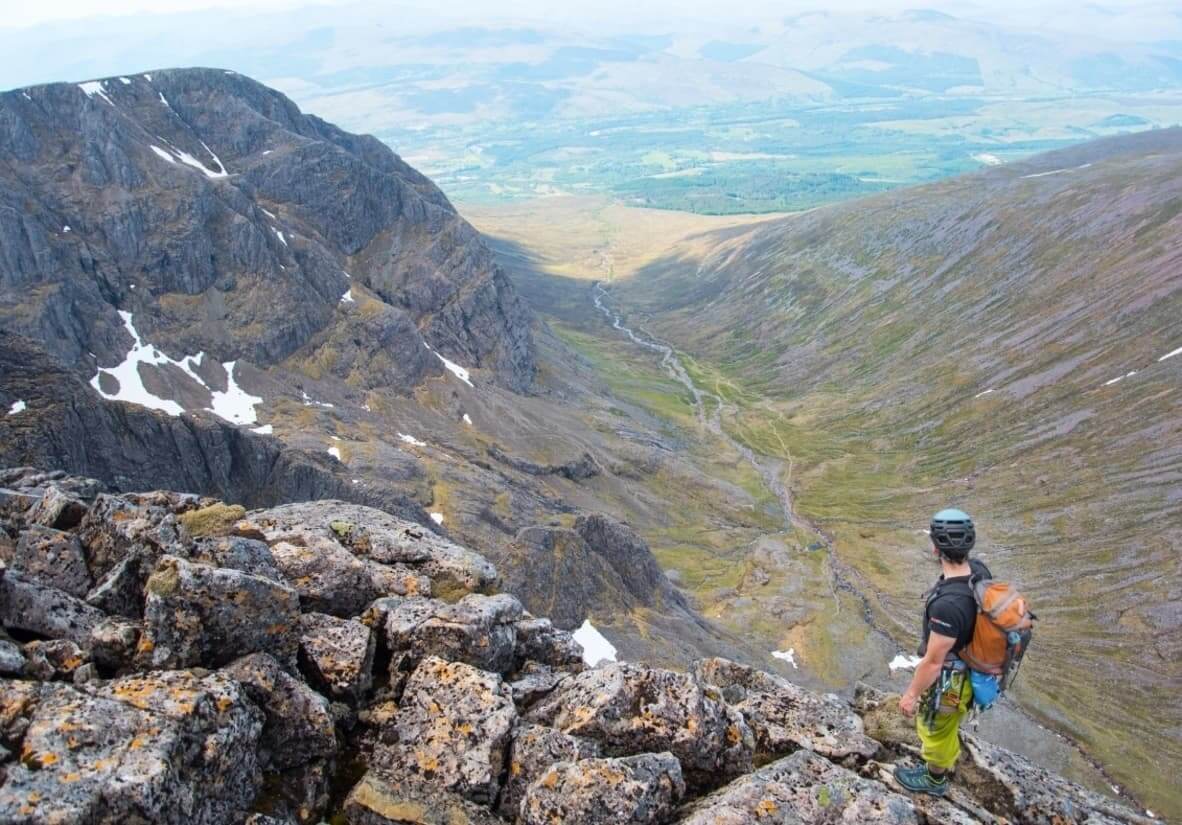 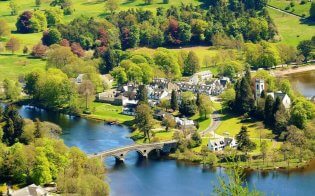 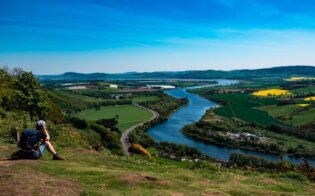 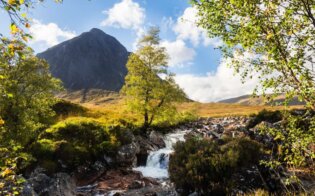 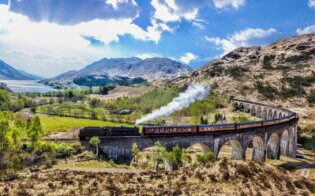 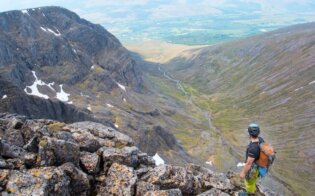 A Coast to Coast route from Perth

Explore the central part of the Scottish Highlands on a tour of medieval ruins, river-crossed villages and mountain-protected lakes, from the ancient capital, Perth's "Fair City" on the banks of the River Tay— Scotland's longest — to the UK's outdoor activity capital, Fort William.

This coast-to-coast adventure will take you through the lush forests of Dunkeld Hermitage to the town of Aberfeldy. Walk among oaks, ash trees and elms to the village of Kenmore, at the northern end of Loch Tay.

Cross the heart of Perth between waterfalls and mountains to the village of Kinloch Rannoch, on the edge of Loch Rannoch. Before you arrive in Fort William, discover Rannoch train station on the West Highland Line, the most remote railway station in the British Isles that crosses through Rannoch Moor.

Discover what was Scotland's former capital for 5 centuries, the "Fair City" of Perth, which during the Middle Ages was called St. Johnstone, and which today is the newest city in the country.

Start the walk by heading from the centre of Perth to the north, along a path that passes under the city bridge, on the banks of the River Tay. Walk uphill along the River Tay, listed as Scotland's most famous salmon fishing spot, and take a tour to the edge of the forest, crossing several bridges to reach River Almond.

Cross the marked paths and stone houses to get back to the River Tay, to the Taypark road, where a path full of rabbit burrows leads to the main road of the village of Luncarty.

Walk just 12 minutes to the village of Bankfoot, with no more than 2,000 inhabitants and only 2 authorized locations: the Bankfoot Inn and the Atholl Inn.

Start at the southern end of Bankfoot heading north on the Cairneyhill road. Cross the Gellyburn Forest Trail through agricultural fields to Kingswood. Head west to the Rohallion Woods Forest Trail as you admire and traverse its loch.

Descend from Birnam Hill and roll it along a rocky path to leafy Birnam Glen. Cross a pedestrian bridge and forest where you'll find your way to the magical forests of Dunkeld Hermitage, a natural paradise toured by Queen Victoria, composer Mendelssohn and painter William Turner.

Cross the River Braan over a stone bridge to Ossians Hall and admire the views as you climb up to Rumbling Bridge. Venture up to the moor where Glen Garr and a beautiful glen await you, before descending to Dunkeld.

Today's destination is the small village of Aberfeldy, home to the famous birch forests in Birks of Aberfeldy, the Dewar Distillery and the Aberfeldy Watermill, a bookstore, cafe and gallery set in a former protected water mill.

Head southwest and cross Dunkeld Bridge to the junction of the old military road with the A9. Take in the landscape of Craigvinean Forest and, if you wish, head to Pinecone Viewpoint, located inside Tay Forest Park to admire the views.

A rising tour among forest trails will take you to Grandtully Hill. Descend west on a riverside path, cross the small village of Little Ballinlough and visit the distilleries on the road before reaching Aberfeldy.

Head west on the Crieff Road to Birks of Aberfeldy, originally called the Moness Lair, located above Moness Falls, designated as a Site of Special Scientific Interest for its botanical characteristics.

You will reach the northern end of Loch Tay to its mouth, in the village of Kenmore. Visit Scotland's oldest, the prehistoric Croft Moraig stone circle, or the country's heritage centre in Crannog. Walk to the Tay Forest Park, believed to be Scotland's first managed forest, and admire the views of Taymouth Castle.

It descends to Fortingall, the home of the “Fortingall Yew”, a tree with an age of approximately 5,000 years and considered the oldest living being on earth. Visit the grounds of the parish church where a primitive Christian site dedicated to the Bishop of Iona is located.

Walk to the Schiehallion, a magnificent cone-shaped mountain that dominates the glen, known as one of the easiest Scottish “munros” or mountains to climb. Climb the path that leads you to the glen surrounded by heather, to the road by the River Tummel.

From the top of the Schiehallion, admire the views of Rannoch Moor and the peaks of Glen Coe. If you choose, walk north to Uamh Tom Natural Cave to Mhor fhir, about 4 m long.

Descend down a stony path to the Victorian village of Kinloch Rannoch or "end of the loch", at the eastern end of Loch Rannoch, a paradise of wildlife, migratory birds, ospreys and red squirrels.

Head to Rannoch station, one of Britain's most remote train stations, located 47 kilometres west of Kinloch Rannoch. Take the route south that borders all of Loch Rannoch while enjoying views of the open moors, lakes and solitary forests.

Take the road beside River Gaur, which surrounds the northern part of the Loch Eigheach Gaur Reservoir, and climb to the world-famous Rannoch station, a romantic and beautiful railway that travels from Glasgow to Mallaig over majestic moors, hills and viaducts.

Cross the extensive mountain moors of Rannoch Moor, an outdoor space to the north and west of Rannoch station. Tour one of Scotland's last moors, designated as a Site of Special Scientific Interest (SSSI) and special conservation area.

Walk among rocky and swampy trails, through the lochs and wildlife environment in this wasteland with lots of plants, insects, birds and animals such as grouse, roebuck and deer.

If you like film and television, you should know that in this beautiful place were filmed some scenes from the series Outlander and Harry Potter and the Deathly Hallows: part 1.

Behind Kingshouse, start the most dramatic stretch of the West Highland Way: cross the stone bridge over the River Etive as you admire Buachaille Etive Mor ahead. Walk the old Wade military route and follow the glen to Altnafeadh.

Climb the 'Devil's Ladder', an easy and calm zig zag path. At the summit, 550 m away, take in the views of the Glencoe Mountains and Blackwater Reservoir, the longest dam in the Highlands (1 km).

Admire the peaks of Mamores and Ben Nevis, Britain's highest mountain and descend a bridge over Allt a' Choire Odhair Mhoir. Take the route to a bridge over the River Leven to reach Kinlochleven.

Head from the bridge over the River Leven to the north on the Lochaber road and deviate a little to Grey Mare Waterfall, part of a nature reserve, before continuing and admiring the views of the Mamore Mountains.

Climb up through a birch forest to the Kinlochleven and Loch Leven viewpoint and take the ancient military route to Fort William. Admire the conical mountain of Beinn na Caillich and walk to an optional detour to the top of Dun Deardail, an Iron Age fort and viewpoint.

Zig zag down to the Ben Nevis Visitor Centre on the outskirts of Fort William, to begin, if you wish, the mountain ascent. Cross the town to the end on the pedestrian High Street, the final section and official end of the route on the West Highland Way. 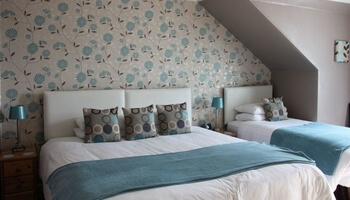 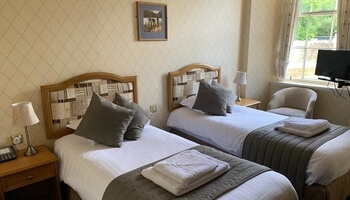 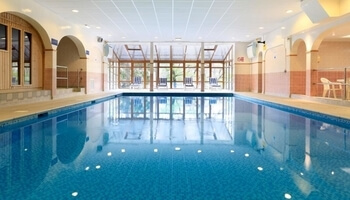 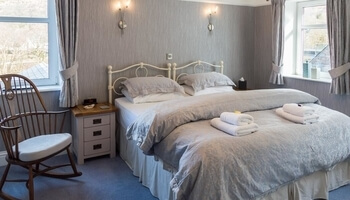 You arrive at Glasgow Airport, which is less than 1 hour and a half's drive from Perth. You can also reach Edinburgh Airport, just 1 hour away or the small Dundee Airport, 30 minutes away. Another option, farther away, is Aberdeen Airport, about a 2-hour drive away.

By car, take the M90 route from Edinburgh and the M80, M9 and A9 from Glasgow, the fastest routes to the Perthshire region.

If you prefer, take a direct train from Edinburgh (1 hour 15 minutes) or Glasgow (1 hour 20 minutes), to Perth train station.

For the return from Fort William, you can take a bus to Glasgow, on a journey of approximately 3 hours, or a train, a 4-hour journey through the spectacular Scottish landscapes. Another option, if convenient to your next destination, is Oban Airport, just 60 km from Fort William.

What is the best time of year to do this route?

The route is available between April and October, so any time you choose between these months will give you an amazing experience, as the weather is pleasant and cool for walking.

Even in summer, when it is usually very hot in several countries, in Scotland you will enjoy some very pleasant days to explore the various natural landscapes that this adventure has for you. Keep in mind that during summer months, mosquitoes (midges) appear on the route, so we suggest wearing repellent.

This route is rated with a medium-high difficulty level, with some demanding ascents and descents, especially in the most remote stretches. The walks can be up to 28 km and 8 hours daily, approximately.

Therefore, we propose several itineraries with different levels of intensity and we recommend you have walking experience, in the handling of navigation instruments (maps and compasses) and follow an active lifestyle.

If not, you can prepare some months before starting the route by walking daily on mountainous terrain. You can also improve your endurance with cardio exercise.